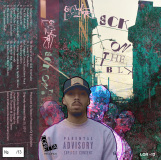 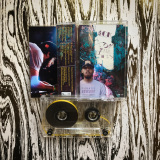 Bck On The Blk by Evilldewer - Clear "Ghost"

SKU:
$9.00
$9.00
Unavailable
per item
Features the original artwork printed on a double sided J-card. Each copy is home dubbed in real time on a clear cassette with yellow leader. Limited to only 18.

Boston based producer/DJ Evilldewer takes us on a dark and twisted journey with his latest masterpiece "Bck On The Blk".

From the rugged horror show sounds of "Double Hammers" to the jazzy hypnosis of "Paper Cha$e" the rabbit hole is deep on this one.

While “Bck On The Blk” is primarily an instrumental album it’s full of dope appearances by Spnda, Asethic and the talent deep "Corner Chronicles" which features Estee Nack, Haze of Main Aim & Magno Garcia.

Mass Appeal recently had this to say when they premiered the video for Corner Chronicles..

“A bunch of our content is Halloween-themed today. However, other than the name EvillDewer, this cut is not very spooky. Then again, with these three skilled MCs bringing their A-game, this song may be scary AF to mumble rappers.

Murda Mass is quickly becoming our go-to region for that real rap. And we gonna keep banging you in the head with premieres by underrated artists from the area. On this day of merriment and mayhem, Boston beatmaker EvillDewer is releasing his Bck On The Blk album on tape in conjunction with boutique cassette label Loretta Records. To mark the occasion, Dewer is dropping the fly visuals for “Corner Chronicles,” the posse track off the must-cop project. And where else would you shoot the video for “Corner Chronicles” but on the block? Evill and the homies cipher up outside the corner store, spewing fire as they wander the aisles of the mom’n pop.

We already hipped you to Estee Nack a couple weeks ago. But truth is, if you’ve been complaining about the subpar quality of hip hop in the last couple years, you should have bin known Nack and his Tragic Allies crew. As for Magno Garcia and Haze, they might not be dominating your playlists yet, but their verses on “Corner Chronicles” should have you headed for their SC or BC pages. The beat is reminiscent of something Wu or Mobb would have rapped on circa ’96, which clearly motivated these brick poets to show and prove. Get ready for your first listen of many.”

Sold out
Add to Cart